The mother of a 34-year-old man who died suddenly two weeks after his first dose of Pfizer’s COVID vaccine said she believes her son would be alive today if he had had the information he needed to make an informed decision about the vaccine.

Victor Castillo Simoes died May 5, 2021, from an acute aortic dissection — an uncommon medical emergency in which the inner layer of the large blood vessel branching off the heart’s aorta tears. The condition mostly affects men in their 60s and 70s.

Simoes’ mother, Henrietta Simoes, said her son’s only symptom was the chest pain he experienced shortly before he died.

Simoes, a senior manager at Amazon, received his first Pfizer shot on April 20, 2021, at a Seattle, Washington Safeway.

Fifteen days later, he woke up feeling unwell and had chest pains, Henrietta said. He called an ambulance and told his girlfriend he “wasn’t right,” and needed to get checked out.

“When his girlfriend arrived, he introduced her to the medics and then collapsed,” Henrietta said. “He was unresponsive from that point on.”

Simoes was intubated in the ambulance and was taken to Harborview Medical Center in Seattle. Thirty minutes later he was declared dead, Henrietta said.

Simoes’ family had an autopsy performed. It showed he experienced an acute aortic dissection.

“I have no idea what precipitated this so the pathologist sent out for genetic testing to see if there was any kind of predisposition or collagen deficiency that would have led to the dissection. The initial panel showed nothing. My husband and I were also tested and the results showed nothing.

“The pathologist said Victor was not dilated, did not have an aneurysm and did not have high blood pressure. He also didn’t have the normal things that would lead to dissection.”

Henrietta said she is working with a renowned surgeon from a prestigious university who agreed to do a whole genome workup on Simoes and her other children to see if “anything comes up.”

Another researcher, who agreed to look into Simoes’ inflammatory markers, said he shared her suspicions that Pfizer’s vaccine triggered Simoes’ fatal heart condition.

“Victor passed away 15 days post-Pfizer vaccine,” Henrietta said. “It indicates he would have been at the height of the antibodies and I believe he had an inflammatory response to the vaccine — as we know inflammation plays a major role.”

“Typically, people who have this condition have a bicuspid valve that first leads to an aneurysm. All in all, 34 is very rare to have a dissection. When it happens it usually happens with 60- to 70- year-olds. We’ve been in contact with the John Ritter Foundation and many cases they have are from genetic causes and diseases that lead to connective tissue disorders.

“Everything I read says you’re at the height of your antibodies like two weeks after the vaccine. This is my contention. Why didn’t he dissect three weeks before or six months after receiving the vaccine? Why, when he was at the height of these antibodies and having a hyperinflammatory response, did he have a dissection?”

Henrietta, a teacher with a law degree, said the family is trying to “knock down” all possibilities. But so far, there is no genetic link. She believes the vaccine triggered the sudden onset of her son’s fatal heart condition.

Henrietta on Sept. 9, reported her son’s death to the Vaccine Adverse Events Reporting System (VAERS) — the primary government-funded system for reporting adverse vaccine reactions in the U.S. — because the hospital did not file a report.

“How do we know the true number of people having vaccine injuries if the doctors are not reporting to VAERS?” she asked.

Henrieta said the Centers for Disease Control and Prevention (CDC) did not investigate her son’s death or follow up with her on the report:

“I reported it to the CDC. I called them and I got a ridiculous form letter. I got two letters. The first one was ridiculous and the second was even more ridiculous. I received the second letter after I asked them why they were lying to the American people.”

Henrietta said the CDC is failing to investigate the deaths reported to VAERS attributed to COVID vaccines, including her son’s.

A member of the CDC’s Immunization Safety Office staff on Nov. 19, 2021, confirmed the CDC had received the VAERS report but said staff “do not routinely contact the family except to confirm receipt of the report.” The person referred Henrietta to the agency’s website for “information on loss and grief and ways to cope with stress and anxiety.”

“They told me to contact the health department, said they were sorry for my loss and referred me to the [Countermeasures Injury Compensation Program (CICP)] program,” Henrietta said. “How can the CDC properly investigate a reported death if it does not contact the family for information?”

The CICP is an obscure government program that rarely compensates individuals seriously injured by covered countermeasures, such as COVID vaccines.

Since the program’s inception in 2010, 7,033 claims have been filed, but only 29 claims were compensated. As of Feb. 1, the CICP had approved only one claim related to a COVID vaccine injury, but that claim has not been paid out.

“I have called law firms that deal with vaccine injuries. They say their hands are tied until the vaccine gets into the [Vaccine Injury Compensation Program (VICP)], but I don’t want money and I don’t want the VICP. I want to get Pfizer.

“They have the report that came out with eight or nine pages of adverse effects and after this report came out this vaccine should have been shut down. It should have also been shut down because alternative medications and therapies are available [to treat COVID]. If they had shut this whole thing down, my son would be alive.”

“Why are places not reporting the deaths linked to the vaccine, my son passed away after receiving the Pfizer vaccine?” She asked in the email. “Where is the data showing that Pfizer is unsafe and makes people of young ages pass away, this needs to be brought up to higher-ups at CDC.”

In her email, Henrietta told the CDC she was concerned the U.S. Food and Drug Administration wanted to wait 76 years to release the data it considered in approving Pfizer’s COVID vaccine and that the pharmaceutical giant had excluded participants from its clinical trials.

In a response to Henrietta on Nov. 23, 2021, a CDC staff member offered condolences and acknowledged the loss of her son but reiterated COVID vaccines “have undergone and will continue to undergo the most intensive safety monitoring in U.S. history,” and that a review of available “clinical information, including death certificates, autopsy, and medical records has not established a causal link to Pfizer-BioNTech COVID-19 vaccination and deaths.” 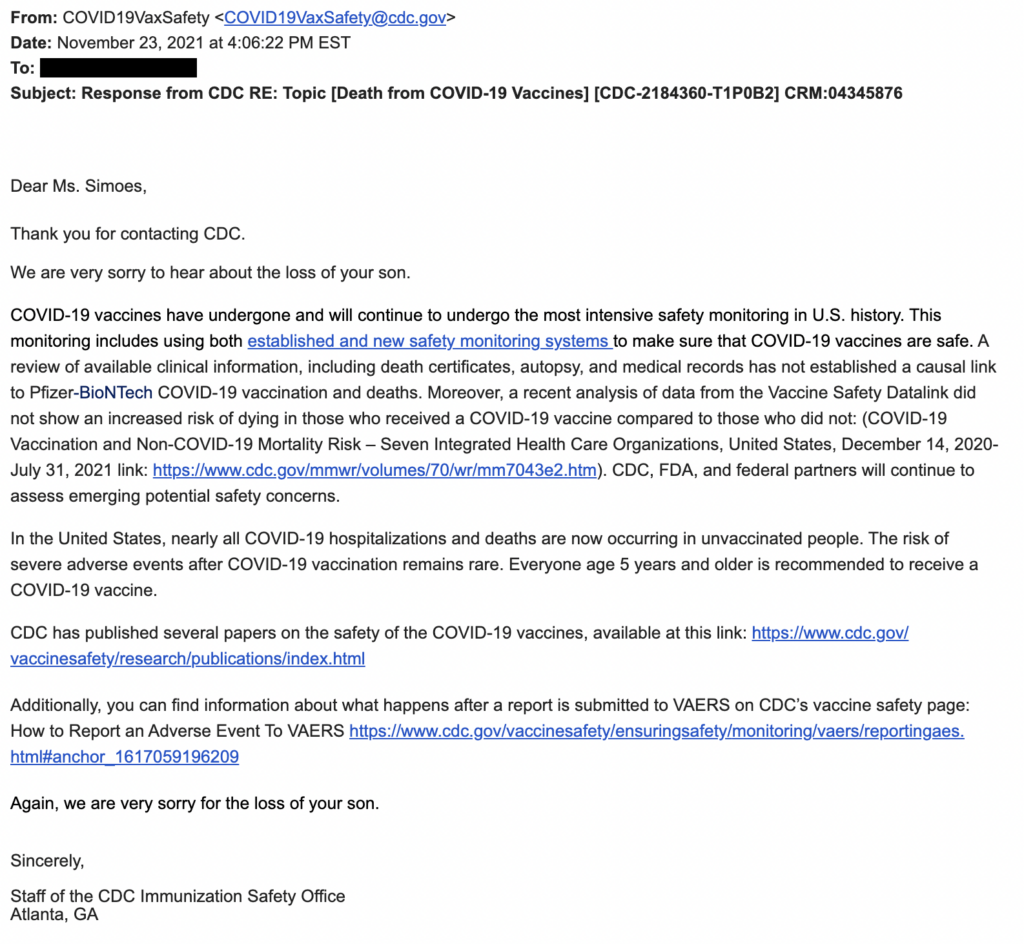 The staff member then referred her to an analysis of the Vaccine Safety Datalink, a database, which is not available to the public, that collects reports of COVID vaccine injuries. The analysis did not show an increased risk of dying “in those who received a COVID-19 vaccine compared to those who did not.”

“In the United States, nearly all COVID-19 hospitalizations and deaths are now occurring in unvaccinated people. The risk of severe adverse events after COVID-19 vaccination remains rare. Everyone age 5 years and older is recommended to receive a COVID-19 vaccine. CDC has published several papers on the safety of the COVID-19 vaccines, available at this link.

“Additionally, you can find information about what happens after a report is submitted to VAERS on CDC’s vaccine safety page: How to Report an Adverse Event To VAERS.

“Again, we are very sorry for the loss of your son.”

On the VAERS website, it states the CDC will reach out to a reporting individual for additional information only if “essential fields” of the VAERS form are not filled out properly.

“VAERS will not contact the reporting individual by phone for follow-up,” the website states. “The VAERS program follows up on reports classified as serious by attempting to obtain medical records to better understand the event.”

In many instances, including Simoes’, medical records are not available for those who suddenly die after receiving a COVID vaccine and did not make it to a hospital for treatment — which according to the VAERS website, means the CDC is not following up on these reported deaths in VAERS.

“The CDC says its rare to have severe adverse effects. What do you classify as rare? If it’s your child how is it rare? The CDC has no proof there is no causal link. They’re not doing in-depth studies as to what has happened to this person. I really believe the vaccine is a trigger, and somebody needs to be looking at this.

Henrietta said U.S. health agencies are “lying to people” that there are no adverse effects associated with COVID vaccines.

Henrietta said she and her family are not anti-vaxxers.

“We’ve all been vaccinated, but being from New York, we were all scared out of our wit’s end and didn’t know which end was up,” she said.

“But the government knew and they kept bringing the numbers for COVID up and up and created an emergency situation while suppressing therapeutics because they would not have been able to get EUA [Emergency Use Authorization] for COVID vaccines.”

Simoes was the last in his family to get the vaccine and didn’t have access to the information available now, Henrietta said. “Without the knowledge that there are therapeutics that actually work or potential risks of the vaccine, how can you make an informed decision?”

Henrietta said she did not want to diminish the deaths due to COVID, but to “suppress alternative treatments and mandate vaccines is criminal.”

“If you get injured what recourse do you have?” she asked. “You have no way of suing so if you become a paraplegic because of it, where do you go?

Henrietta said she will not get any boosters, nor will her husband or children.

“We don’t know if we are genetically prone to something,” she said. “No more vaccines or boosters.”

Henrietta said her life will never be the same, nor will her family.

“If this could have been avoided by more critical thinking about what we’re really doing and what can we do in lieu of vaccines I think many peoples’ adverse effects could be eliminated,” she said.

Henrietta encouraged others to do their own research, be careful about what they put into their bodies and talk to physicians who understand the risks of COVID vaccines.